Employee No. 7 Is Retiring: Wendy Harder Served SUA With Unfailing Optimism and Positivity

Wendy Harder was working for Mission Viejo Company, which built planned communities including Aliso Viejo, when one of her colleagues heard about a university that was facing long delays getting permission to build a campus in Calabasas. Once they saw the quality and the boldness of Soka University of America’s vision, Harder’s company contacted its founders with a proposal. They would get the permissions SUA needed in only a few months if it moved the campus to Aliso Viejo.

SUA’s founding team agreed that the hilltop setting was perfect, and Harder soon accepted an offer to become the university’s seventh employee. Joining SUA when the campus was still a pile of blueprints and a patch of dirt, albeit with gorgeous views, was “an incredible opportunity to do something new and watch a new university grow from the very beginning,” Harder said.

The community ties Harder developed before joining SUA and that she has nurtured in the years since have greatly benefited SUA, said Vice President of Finance and Administration Arch Asawa. “Wendy has been pivotal in building strong relations with our local government entities, chambers of commerce, community organizations, and media outlets,” Asawa said. 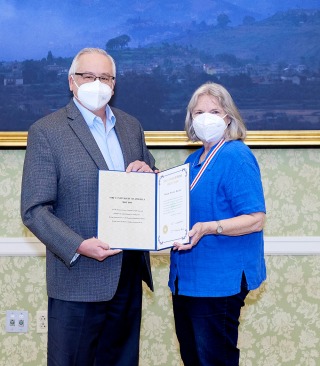 To recognize her exemplary service to the university, President Ed Feasel presented Harder with the Soka University Award of Honor and medal during her final week on campus. The certificate, signed by Pres. Feasel and university founder Daisaku Ikeda, states: “In recognition of the dedicated contributions you have made to the development of Soka University of America through your activities to promote world peace and to enrich human culture, and your deep understanding and appreciation of the founding spirit of Soka University of America, we hereby present you with this award.”

Harder, who also received a personal note from Mr. Ikeda and his wife Kaneko, is the first retiring employee to be honored with the award.

A Team of Visionaries

Harder easily recalled her first day with SUA. She remembered sitting around a table with the six other employees, who asked her to help with the brochure they needed to begin recruiting SUA’s first class. Harder’s request to see the college’s mission statement drew blank stares. “They had this vision for this wonderful campus and all the things that they were going to be able to do and create, but nobody had written down how we were going to describe SUA yet,” Harder said.

The team got to work defining student-teacher ratios and average class sizes—all the specifics Harder needed to begin marketing the school. Once they researched Mr. Ikeda’s vision for the school, the problem of a mission statement was solved. “The idea of fostering a steady stream of global citizens committed to living a contributive life was so simple and so perfect,” Harder said.

Another dilemma soon popped up. A brochure marketing a school needs pictures of students, but SUA was three years away from having any on campus. Harder didn’t believe in using stock photography, so the team began speaking to high school sophomores about SUA and invited those who expressed interest to tour the grounds and appear in the brochure.

Harder still thinks fondly of SUA’s first class of 120 undergraduate students who first walked onto campus in 2001. “They applied not knowing if construction was going to be complete or if the school would even get accredited,” she said. “They were pioneers. They were the ones who were brave enough to want to be part of something new.”

Of all the events and projects she’s run through the years, Harder named the International Festival as a favorite. From its inception as a celebration of SUA’s first anniversary—with students from campus clubs performing everything from multicultural dance to hip hop to jazz; selling food, artwork, and crafts; and featuring local non-profits—the festival has grown to a beloved event drawing thousands of people.

“The festival was a major way for a lot of people who would never have seen the campus to visit, and it has given us a lot of partnership opportunities with community groups,” Harder said.

Director of Philanthropy Linda Kennedy agreed that the festival Harder launched “has become one of Orange County’s most talked-about events and will live forever in the history of SUA.”

In addition to her many contributions to SUA and Aliso Viejo, Harder’s colleagues said they will miss her presence on campus. Working with Harder, Kennedy said, “has been a true delight.”

“Wendy has left an indelible mark on the university with the programs and relationships she’s created over the years and her special ability to connect Soka to the community and welcome the community to campus,” Kennedy said.

Asawa, who has worked with Harder since SUA’s early days, noted that she is known on campus and beyond for her sharp wit and communication skills. “I have truly admired and will especially miss her calm, steadying demeanor and unfailing optimism and positivity over the past nearly two and a half decades,” Asawa said. “I will greatly miss Wendy as she has been a part of my Soka experience from day one.”

As she cleaned out an office filled with artifacts collected through the years, such as UN flags used at graduations, Harder expressed appreciation for her SUA colleagues. While much has changed from the early days when the staff and faculty worked together in the library, Harder said she was most impressed by their ongoing, shared commitment to SUA’s vision. Lights in Founders Hall, where she has her office, are often burning late into the night or early in the morning.

“There’s so much personal commitment from the staff and faculty for the benefit of the students,” she said. “And it’s been so fun to watch our students after graduation and see what they’re doing in the world.”

Harder, who plans to begin her retirement with a white-water rafting trip, described SUA as a wonderful place to work. “It’s such a supportive environment,” she said. “People listen to each other and together figure out the best way to do things. I’ve been very blessed.”