“Moved by Nature”: Outdoor Education and the Co-Existence of Nature and Humanity

On a cold January day, a dozen Soka students waded into the frigid Øresund Strait in Denmark to fish for shrimp and collect data. They’d spent the morning in the Øresund Aquarium learning about European marine life and the aquarium’s educational programs, and now they measured the water’s temperature and wind speed. More important, they were experiencing a typical day in the life of a Danish seventh-grader.

Like many schools in northern Europe, an increasing number of Danish schools have implemented udeskole—outside school—into their curriculum. Last January, the Soka students and Environmental Studies Professor Deike Peters traveled to Scandinavia to study outdoor education and its role in fostering co-existence of nature and humanity.

The trip was part of the “Moved by Nature” Learning Cluster co-developed by Prof. Peters and Kentaro Shintaku ’23. The clusters, which take place during a three-and-a-half week period in January, are designed for Soka students to collaborate with professors to explore complex issues. Faculty and students co-design these unique courses during the Fall semester and often travel across California and the world to study these topics and develop solutions together.

Prof. Peters and the students spent 10 days in Denmark and Sweden, conducting interviews with educators and working with children in nature-based schools. Students created a website Moved by Nature and a short film to document their findings. 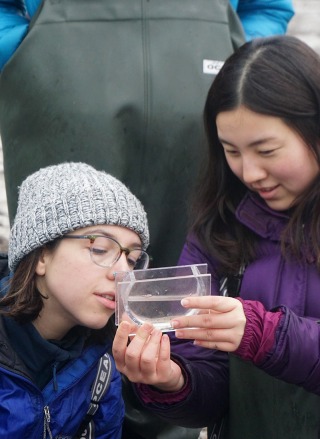 Research has shown that substantial time spent in outdoor environments promotes overall well-being and positive environmental values among children, as well as instills concern for the environment. Studies have also shown that children who grow up attending these schools have better motor skills and focus, and develop healthy lifelong habits. Despite this, modern national education systems—especially in Western countries like the United States—tend to emphasize the importance of math, science, and verbal skills when measuring intelligence. This often stunts children’s development in other areas.

Dubbed natureskola in Swedish and udeskole in Danish, nature schools challenge this status quo. They’re quickly becoming a popular alternative to typical preschool and kindergarten. Since the 1950s, when the concept was developed by Gösta Frohm, a Swede, nature schools have embraced friluftsliv (literally: “free air life”), holding classes in the forest and focusing on learning through play. More than 300 nature schools are operating across Scandinavia, and other countries are following suit.

While conducting school in nature is not feasible everywhere, there are many local governments and non-profit organizations in the United States that are working to make it more accessible. In 2016, Oregon voters passed a measure authorizing funds from the state lottery to provide all fifth- or sixth-grade students in Oregon access to a week of Outdoor School. In California, organizations like Exploring New Horizons offer elementary and middle schools a three-to-five day outdoor education opportunity along the central coast. With the rate of climate change rapidly increasing, incorporating outdoor exploration and learning in early childhood may be more important than ever before to the creative co-existence of nature and humanity.

Shintaku had some experience with outdoor education in his own childhood. He grew up in a small town in Hokkaido, Japan—an island known for volcanoes, natural hot springs, and snow. He graduated from a forest kindergarten where “classes” were often held in the forest. Established in 2002 by Mikihiko Yamamoto, the school encourages children to explore, play, and learn outdoors.

Shintaku continued his education at an English language school opened by SUA alumnus Nitesh Sil ’11, where he first learned about Soka’s humanistic education. He was inspired by Makiguchi—the founder of Soka Education—and found many similarities in the student-centered pedagogies. “My dream attending Soka University has been to create research that combines my love of nature and a Soka education,” Shintaku said. The “Moved by Nature” Learning Cluster class was the perfect opportunity to dig deeper into the topics and share this passion with other students.

Maddie Reitz ’22—one of the other student researchers in the group—has been deeply involved in Outdoor School in her home state of Oregon, both as a young student and a leader in high school. “Being from a relatively rural area myself, it was really illuminating to see how green spaces for play and learning had been introduced to big cities,” she said. “This Learning Cluster has encouraged me to keep pursuing questions of how best to educate our youth and address inequalities when it comes to educational opportunities.”