Erin Gruwell and the Freedom Writers connect with Soka audience 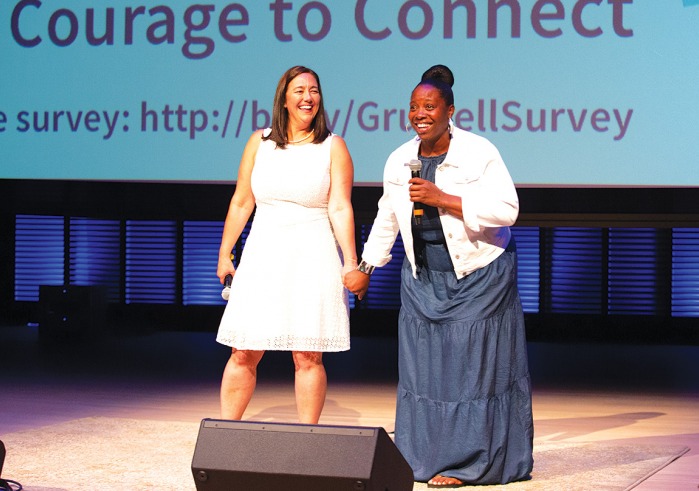 Erin Gruwell, the inspiring and beloved Freedom Writers educator, kicked off the academic year with a Critical Conversations @ Soka event, “The Courage to Connect,” on October 3.

Many may remember Gruwell as the idealistic 23-year-old English teacher at Wilson High School in Long Beach, California, who was confronted with a room of “unteachable, at-risk” students.

Determined to make a difference, Gruwell helped 150 students change the course of their lives by connecting across cultures and continents and writing about it. Armed with pens and notebooks, the Freedom Writers challenged themselves and the education system to stop ignoring them. Their story resulted in the popular book, a movie starring Hilary Swank, and a PBS documentary released this year.

Gruwell is also founder of the Freedom Writers Foundation, whose mission is to advocate for students and teachers by providing tools that facilitate student-centered learning, improve overall academic performance, and increase teacher retention.

Anna Lane, a member of the Soka master’s program in Educational Leadership and Societal Change, introduced Gruwell at the event, reminiscing, “I remember watching the movie about Erin and the Freedom Writers when I was in college to become a teacher. I watched it alone, and remember crying and feeling so encouraged to pursue my dream of fighting for social justice in education, which eventually brought me here to study at Soka.”

Lane added that Gruwell’s “work aligns so much with the spirit of our university founder, Dr. Daisaku Ikeda, who shares with us about developing the ability to connect beyond gender, class, race, and nationality. Doing this is no easy task. It takes self-reflection, courage, and the determination to engage in dialogue.”

In addition to meeting Gruwell, the audience enjoyed the reflections of three of the original Freedom Writers, Kanya Sim, Shanita Jones, and Shanate Jones. After the event, many audience members stayed to have books and programs autographed.

“Erin Gruwell and the Freedom Writers taught me that it is important to never give up on anyone,” Lane said. “As educators, we have a responsibility to try and bring hope to students and to not be discouraged by the immediate environment or circumstance we are faced with.”