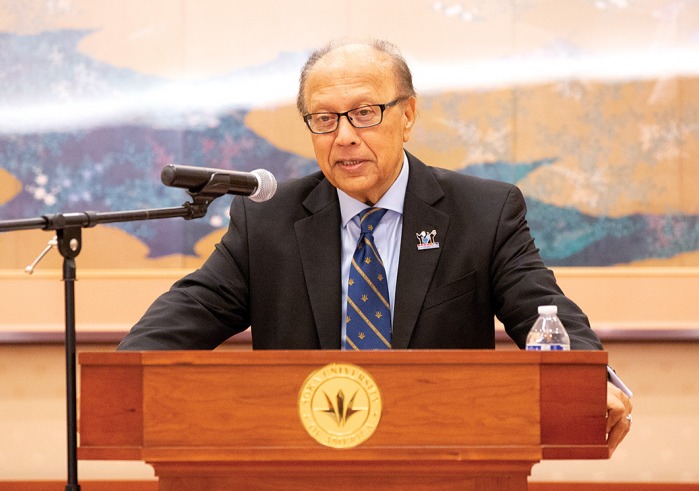 Coinciding with the 150th birthday of Mahatma Gandhi and the 20th anniversary of the United Nations’ culture of peace declaration, Soka University hosted its Sixth Annual Dialogue on the Culture of Peace and Nonviolence Oct. 2-5.

Ambassador Anwarul Chowdhury, former permanent representative of Bangladesh to the UN, chaired the event. Ambassador Chowdhury’s life’s work is to share the “value of peace and equality as the essential components of our existence.”

His message was one of encouragement, that every individual must work to realize their highest potential and become an agent of peace and nonviolence. He discussed the United Nations’ 1999 Declaration and Programme of Action on Culture of Peace, the historic, norm-setting document that is considered one of the most significant legacies of the UN.

In 1998 and 1999 Ambassador Chowdhury chaired the arduous, nine-month negotiations that led to the agreement, which outlines everything the international community has agreed on as the focus of a culture of peace, highlighting education, women, children, and communities.

Participants at the Soka event in October heard presentations from people with diverse backgrounds involved in both practical and intellectual work to advance the cause of peace.

In the words of Ambassador Chowdhury: “The work for peace is a continuous process. Each of us can make a difference in that process. Peace cannot be imposed from outside; it must be realized from within. Let us embrace the culture of peace for the good of humanity, for the sustainability of our planet, and for making our world a better place to live.”