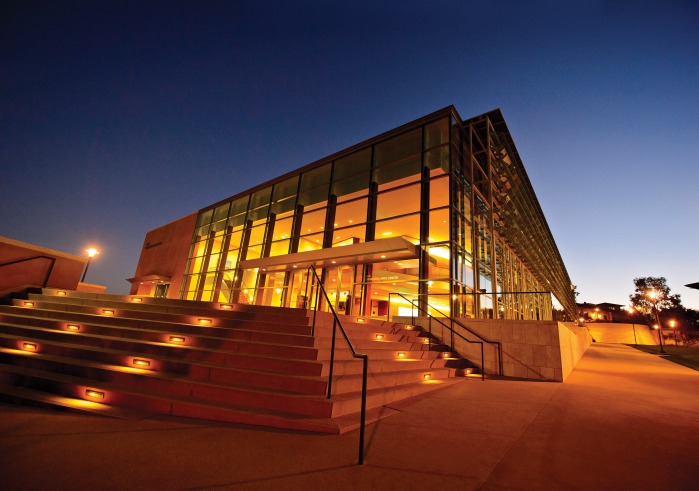 (Aliso Viejo, CA)—Soka Performing Arts Center, in association with BluePort Jazz, has announced its annual Jazz Monsters Series for the 2019–2020 Season. Jazz and its enabling blues tradition redefined America’s self-expression and its own self-understanding. The Jazz Monsters Series honors this uniquely American art form, now a global force. It aims, in particular, to honor the ongoing surprise of musical innovation, lyrical expression, and contagious cheer embodied in the work of premier artists who make Soka’s stage a platform for shared humanity.

Tom Harrell Quartet with Hubert Laws | Saturday, October 26, 2019 at 8PM
Tom Harrell was voted Trumpeter of the Year of 2018 by the Jazz Journalists Association. He is one of the most creative and dynamic jazz instrumentalists and composers of our time. While Harrell is a master of the jazz idiom, he constantly seeks new challenges and influences. His warm, burnished sound on the trumpet and the flugelhorn, and the unparalleled melodic, harmonic, and rhythmic sophistication in his playing and writing, have earned Harrell his place as a jazz icon to aspiring musicians and devoted fans alike. Winner of the 2011 NEA Jazz Masters Award and Grammy Award nominee Hubert Laws, who is the premier musician on flute in jazz, joins Harrell for an exceptional night of music.

In addition to the award by the JJA, Harrell also received the Award of Recognition by the Festival of New Trumpet Music. He is a frequent winner in DownBeat and JazzTimes magazines’ Critics and Readers Polls and a multiple-Grammy nominee. Harrell is joined by Mark Turner on tenor sax, Charles Altura on electric and acoustic guitars, Ben Street on bass, and Johnathan Blake on drums, with Adam Cruz playing percussion on one track (“Hope”) on his newest album Infinity. It is also the ﬁrst time that Harrell has recorded in a quintet format with tenor sax and guitar. “The music on Infinity has some interesting textures with multiple guitar overdubs. This is something I have never done before. I was trying some harmonic ideas that are new to me” says Harrell.

Harrell’s music is at once intelligent, soulful, fresh, and accessible. No matter the size of the group he works with, the trumpeter-composer deftly weaves complex and innovative harmonies together with daring rhythmic concepts and unforgettable melodies while utilizing the available colors to full effect. The last 10 years have ushered Harrell through a singularly fruitful period. While continuing to tour actively around the world, he has produced an average of one album a year with each successive release markedly distinct from its predecessor.

About Hubert Laws
Internationally renowned flutist Hubert Laws is one of the few classical artists who has also mastered jazz, pop, and rhythm-and-blues genres; moving effortlessly from one repertory to another. He has appeared as a soloist with the New York Philharmonic under Zubin Mehta, with the orchestras of Los Angeles, Dallas, Chicago, Cleveland, Amsterdam, Japan, and Detroit, and with the Stanford String Quartet. He has given annual performances at Carnegie Hall, has performed sold out performances in the Hollywood Bowl with fellow flutist Jean-Pierre Rampal, and was a member of the New York Philharmonic and Metropolitan Opera orchestras. In addition, he has appeared at the Montreux, Playboy, and Kool Jazz festivals; he performed with the Modern Jazz Quartet at the Hollywood Bowl in 1982 and with the Detroit Symphony in 1994. His recordings have won three Grammy nominations.

Laws has been involved in unique projects such as collaborations with Quincy Jones, Bob James, and Claude Bolling for Neil Simon’s comedy California Suite, a collaboration with Earl Klugh and Pat Williams on the music for How to Beat the High Cost of Living: and film scores for The Wiz, Color Purple, A Hero Ain’t Nothing but a Sandwich, and Spot Marks the X.

There are 23 albums in Laws’s discography for such record companies as: Atlantic, CBS, CTI, including: My Time Will Come and Storm Then the Calm for the Music Masters record label.

In addition, Laws maintains his own publishing companies, Hulaws Music and Golden Flute Music, and he founded Spirit Productions in 1976 to produce his own albums and those of promising new artists. He was selected the number one flutist for 24 years by DownBeat readers’ polls including 10 years in a row and was the critics’ choice seven consecutive years. Currently awarded DownBeat number one flutist 2007, 2009, 2010, 2011, 2012, 2013, and 2014. He received the National Endowment Jazz Masters award in 2011.

Harry Allen Trio | Saturday, February 1, 2020 at 8PM
Harry Allen has been described as a throwback since his choice of material is jazz standards. This is jazz music played the way it was “meant” to be played: with confidence, straight-forward and without fussiness or frivolity, beautifully, and with the melody of the saxophone up front.

Gene Lees writes, “Stan Getz was once asked his idea of the perfect tenor saxophone soloist. His answer was, ‘My technique, Al Cohn’s ideas, and Zoot’s time.’ The fulfillment of that ideal may well be embodied in … Harry Allen.”

Allen has recorded more than 70 CDs as a leader and many more as a sideman. Three of Allen’s CDs have won Gold Disc Awards from Japan’s Swing Journal Magazine, and his CD Tenors Anyone? won both the Gold Disc Award and the New Star Award. His recordings have made the top ten list for favorite new releases in Swing Journal Magazine’s readers’ poll and Jazz Journal International’s critics’ poll for 1997, and Eu Nao Quero Dancar (I Won’t Dance), the third Gold Disc Award winner, was voted second for album of the year for 1998 by Swing Journal Magazine’s readers’ poll. The Harry Allen-Joe Cohn Quartet won the New York Nightlife Award for Outstanding Jazz Combo Performance of 2006 and was nominated for Best Jazz Combo by the Jazz Journalists Association for the same year. Allen also won the 2010 New York Nightlife Award for Best Jazz Solo.

Allen is featured on many of John Pizzarelli’s recordings including the soundtrack and an on-screen cameo in the feature film The Out of Towners starring Steve Martin and Goldie Hawn. He has also done a series of commercials for ESPN starring Robert Goulet.

Allen was born in Washington, DC, in 1966 and was raised in Los Angeles and Burrillville, RI. He received a bachelor of arts degree in music in 1988 from Rutgers University in New Jersey, and currently resides in New York City.

Renee Rosnes Trio | Sunday, February 23, 2020 at 3PM
Renee Rosnes is one of the premier jazz pianists and composers of her generation. She has recorded 17 albums as a leader and worked with many of the great jazz masters, including Joe Henderson, Wayne Shorter, Bobby Hutcherson, J. J. Johnson, James Moody, and Ron Carter. Rosnes is a true jazz monster with the killer combination of her beautiful, complex, and virtuoso writing, and her brilliant, passionate, and technically astounding playing.

Upon moving to New York City from Vancouver, she quickly established a reputation of high regard. She was a charter member of the all-star ensemble, the SFJAZZ Collective, with whom she toured for six years. As a leader, Rosnes has released 17 acclaimed recordings. In 2016, Written in the Rocks (Smoke Sessions) was named one of ten Best Jazz Albums of the Year by the Chicago Tribune, one of the Best Albums in all genres of music by the Nation, and was awarded a 2017 Juno Award (her fifth). JazzTimes wrote, “Ms. Rosnes delivers conceptual heft, suspenseful compositions and mesmerizing performances,” and DownBeat praised it as “an exceptional achievement” stating “Rosnes is a virtuoso composer.” The band’s most recent session, Beloved of the Sky (2018) draws inspiration for the title track from Canadian painter Emily Carr, and features master musicians Chris Potter, Steve Nelson, Peter Washington, and Lenny White. Rosnes has produced concerts at Jazz at Lincoln Center, the New Jersey Performing Arts Center, and the 92nd Street Y in New York City. Rosnes is also the music director for Artemis, a new international all-star band featuring the vocalist Cécile McLorin Salvant, clarinetist Anat Cohen, trumpeter Ingrid Jensen, tenor saxophonist Melissa Aldana, bassist Noriko Ueda, and drummer Allison Miller. Rosnes is married to jazz pianist Bill Charlap, and the two often perform in a two-piano setting. The duo was featured on four tracks from the 2015 Grammy Award–winning album, Tony Bennett & Bill Charlap: The Silver Lining.

About Soka Performing Arts Center:
Now is in its ninth season of presenting the best of live performances on its extraordinary stage, Soka Performing Arts Center, located on the campus of Soka University of America in Aliso Viejo, California, is under the new leadership of General Manager Renee Bodie. The 1,000-seat concert hall features world-class acoustics designed by Yasuhisa Toyota, acoustic designer of noted performance venues like Walt Disney Concert Hall in Los Angeles and Suntory Hall in Tokyo.

Soka University of America is a private, non-profit, four-year liberal arts college and graduate program. The campus is ranked in the Top 30 National Liberal Arts Colleges in US News and World Report’s “Best Colleges 2020.” The university is open to top students of all nationalities and beliefs and was founded upon the Buddhist principles of peace, human rights, and the sanctity of life. For more information, please visit soka.edu.

All information is accurate at the time of printing but is subject to change.