When Yusaku Nitta ’23 found out that his summer internship at Soka University of Japan was cancelled due to the pandemic, he decided to learn something new.

Although his interests were originally in biochemistry, he thought computer science would allow for exploration of this field at a deeper level. Nitta applied and was accepted into North Dakota State University’s Research Experiences for Undergraduates (REU) program. While there, Nitta used Python, a computer programming language, to create several machine learning models that analyze gene data to identify specific cancer types.

To compare the models, he evaluated them based on both accuracy and efficiency. Nitta said most of his work was done independently as he troubleshot problems. “The supervisor only checked and told me errors among codes I typed, so I had to think about how I could fix them,” he said. “I was under pressure but could be more responsible for my assignments than I have ever been.” 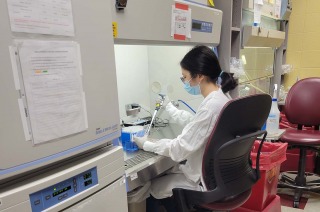 A few states away, Reika Nyunoya ’23 had an opportunity to combine her interests in medicine, psychology, and scientific research this summer at the Mayo Clinic College of Medicine and Science in Rochester, MN. Her research project focused on multiple sclerosis, a neurodegenerative disease in which an overactive immune system damages the central nervous system. Nyunoya specifically focused on the role of one brain cell type, microglia, in multiple sclerosis. Although adjusting to a new city, living on her own, and working full-time in the lab were intimidating at first, she gradually felt a sense of achievement and independence. She learned not to be disappointed in herself when she made an error. “It’s OK to make a mistake as long as you remember and utilize it next time,” she said.

Both students were excited to meet new people in person after a year of online learning. “It was such an amazing experience to meet people from around the US and the world with similar interests and share research topics,” Nitta said.

While working on their projects, the students became increasingly excited to pursue careers in science. They also created and presented posters to summarize their research findings and look forward to doing more next summer.